The City of Cape Town is urgently looking for land to accommodate hundreds of refugees and asylum seekers during the Covid-19 lockdown.

The refugees have been living in the Methodist Church and near the city’s central police station, and have also demanded to be relocated to another country.

“The City and other spheres of government are currently busy with the identification of land to resolve this matter as soon as possible,” said Richard Bosman, Executive Director for Safety and Security.

This was in reply to questions for clarity over an announcement by the church’s Rev Alan Storey that, due to the nationwide lockdown, the refugees would be evacuated to an area designated by the City.

“I was informed early in the week that the refugees in the church will be evacuated by Friday,” Storey wrote in his newsletter on Thursday.

“The evacuation will be in accordance with the State of Disaster Regulations relating to Covid-19.

While the evacuation was being planned, people came and went from the church to buy groceries, and children ran errands on Thursday in the countdown to the midnight lockdown.

A father took his children out and stood at a distance from everybody else as he gently wiped their faces clean with a face cloth and turned their faces to the sun.

Speaking on condition of anonymity, a woman said refugees have rights too, and stood firm that they still believed they would be in danger if absorbed back into their original communities.

They have lived there since the end of October last year, sleeping on the pews, on the floor, the altar, the choir balcony and the mother and baby room. They use the limited toilets and wash basins in the church, and Storey has repeatedly said he is worried about their health and safety in such a confined space.

News24 did not enter the church on Thursday in line with the group’s own Covid-19 rules barring visitors, but understands that it is still a large group. 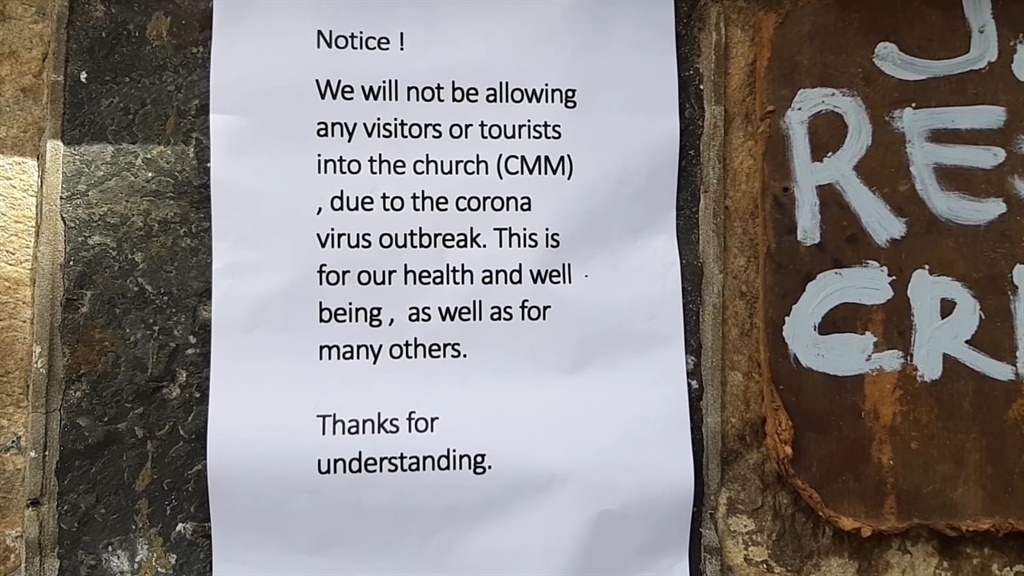 A splinter group of refugees and asylum seekers are living further afield on a wind-blown pavement near the Cape Town central police station. They told News24 that, in the absence of any concrete information on evacuation, they are just expecting the military to move in on them at midnight.

“The soldiers are going to come,” said one woman, as a baby crawled on the pavement towards a yoghurt tub rolling into a dirty gutter.

The children standing around the adults playing endless games of Ludo and draughts had chesty coughs as the autumn wind blew down Albertus Street, and temperature dropped.

Tents were being erected for shelter, some in the street, with their guy ropes held down with rocks, and the smell of urine hung in the air. They rely on the goodwill of neighbouring shopkeepers for toilets.

A broken Cape Grace Hotel tray was placed on a ledge near a cordoned off sleeping place to make the pavement seem homely for the children, who were entertaining themselves by opening and closing the gate of a shop nearby and giggling loudly as each took a turn.

Most of the people slept on the pavement on cardboard, wrapped in the purple blankets given to them by the Gift of the Givers before the refugees chased the charity away from the church last year.

A large consignment of small water bottles was piled up in a corner after being dropped off by a donor. Two women shared a lunch of cheese spread straight out of a bottle with a spoon, while others brought loaves of unsliced bread to share. “There are so many different stories,” said one man, who wore a medical mask and transparent catering gloves. “We don’t know what is happening, but we cannot go back to our own countries.”

Even if they wanted to go, severe travel restrictions and closed borders would make it almost impossible.

The original group of about 700 held a sit-in at the Waldorf Arcade in the hopes of the getting the UN High Commission for Refugees (UNHCR) in the building to send them to another country. They cited fears of xenophobia and personal experiences of being attacked because of their nationalities.

Most are from the Democratic Republic of Congo, Burundi and Somalia and have said it is unsafe for them to return. About two-thirds of the group were found to have legitimate paperwork to be in South Africa as a refugee or asylum seeker. The rest were given a chance to regularise their paperwork.

The police moved them last October from the Waldorf Arcade after a month-long sit-in. Parliament’s Portfolio Committee on Home Affairs was told it was organised by Women and Children Concerned, a refugee rights group.

The church offered them shelter, but due to a violent leadership dispute they are now split in two groups – one living inside the church, and one on Albertus Street near the police station.

Government agencies and the UNHCR have made it clear that they cannot be relocated as a group, and have encouraged them to reintegrate into the communities they came from before the sit-in.

Meanwhile, the City also has to find a place for hundreds of homeless people to live after the disaster regulations stipulated that people could not sleep on pavements during the lockdown.

A visit to one of The Haven’s shelters on Wednesday showed that these beds were being snapped up quickly.

Economy may shrink by up to 4% due to coronavirus,...