When power is at stake, alliances fluid, tenuous and fickle, it goes without saying that the tectonic plates at the ANC’s headquarters are shifting.

This should make the party’s president Cyril Ramaphosa a very anxious man.

In the months leading up to the Nasrec elections, the union between Paul Mashatile (arguably Gauteng’s most powerful politician) and DD Mabuza (the cat controlling Mpumalanga) took shape under the guise of the “unity” ticket.

Mashatile, his premier league associate, the then-North West chairperson Supra Mahumapelo, and KwaZulu-Natal chair Sihle Zikalala (another powerful provincial player) were invited by Mabuza to Mpumalanga to join forces so that they could effect an uncontested conference.

Zikalala ditched the meeting, choosing to send his provincial secretary Super Zuma to go in his stead.

Mabuza managed to sell his vision to the three. 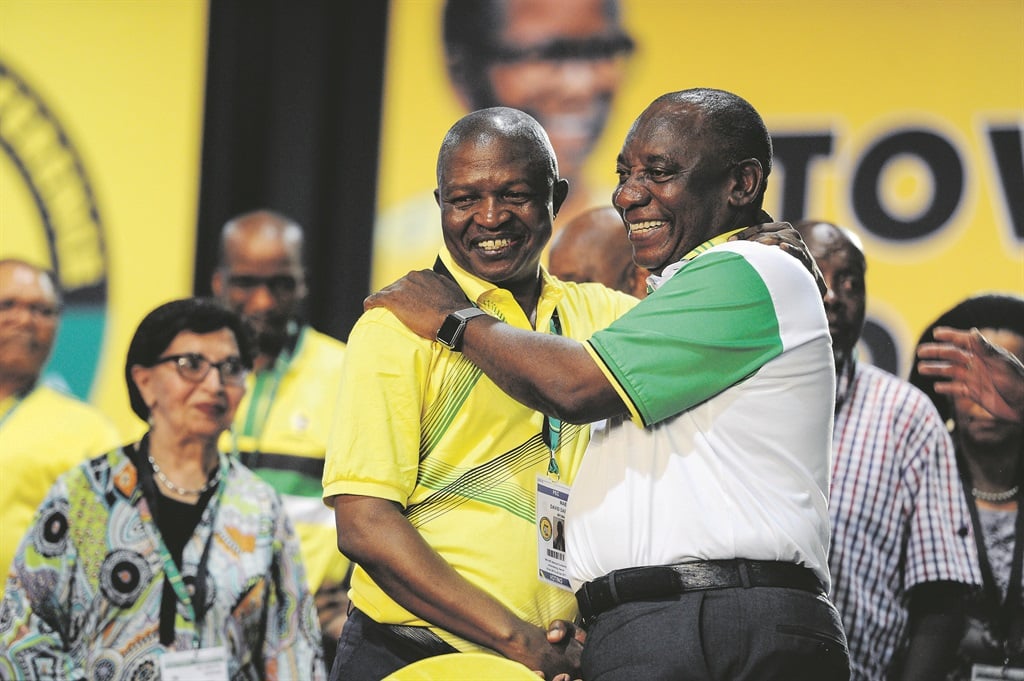 However, an agreement on who would lead the party, between Nkosazana Dlamini-Zuma and Ramaphosa, resulted in a stalemate.

It became every man for himself.

Ramaphosa, with the help of Mashatile and Mabuza, was elected ANC president, but came out of the watershed conference limping.

In tems of policy, he had lost to the NDZ faction, whose resolution for the nationalisation of the Reserve Bank and expropriation without compensation were advanced.

Fast-forward to 2019, and Ramaphosa is isolated – his last surviving ally Gwede Mantashe is taking a neutral stance, partly driven by his resistance to transferring Eskom (overseen by Pravin Gordhan’s Department of Public Enterprises) to Mantashe’s energy department.

Granted, Mantashe – who wields significant power and popularity among the rank and file – has been known to blow with the wind.

In each presidency, he has had close proximity to the incumbent.

Ramaphosa needs allies more than ever in the wake of a realignment within the ANC.

Mabuza has shown his prowess in national politics.

He has also shown he is able to outsmart the best of them.

“The relationship between Mabuza and Ramaphosa is lukewarm. At some point, Ramaphosa would invite him and some of the comrades for dinners at his home. No more. He mixes with big business, he has no time for his comrades, he continues to dig his own grave,” one party leader remarked.

Whispers in the ruling party are, for now, centred around Mabuza and Lindiwe Sisulu.

Sisulu has always been power hungry, and she has never lost sight of her ambitions for the number one seat. In Nasrec, she withdrew from the race in the hopes of becoming Ramaphosa’s second in command. Three high ranking provincial political leaders who were in the NDZ camp say that Ramaphosa’s inability to effectively contend with his foes had resulted in the Ace Magashule, Sisulu, Mashatile and Mabuza faction.

Talk has now turned to who will take over the reins from Ramaphosa come 2022, when the ANC elects its new leadership.

“If you remember what Lindiwe did while at Dirco, she implemented a Nasrec resolution to downgrade the South African embassy in Israel to a liaison office. Cyril did not have the stomach to do this. He would have to answer to his masters.

“She showed courage by going against Ramaphosa, and that is what we need. We need people who can implement resolutions taken at Nasrec. She has shown no fear or favour. She is the front-runner to save the movement,” a provincial ANC leader told News24.

The provincial leader, who has close ties to Magashule, said only Sisulu and Finance Minister Tito Mboweni had outlined clear plans for their respective departments.

Another party leader praised Sisulu for developing a workable plan for the Department of Human Settlements, Water and Sanitation.

A seat at the big table

To accommodate all the players, the three party insiders say they will resurrect the call to expand the party’s top leadership structure to nine.

This was largely rejected by conference delegates, with Zikalala leading the resistance to this proposal.

“There are many discussions. There are many moving parts. What is certain today may change tomorrow. The big discussion is around comrades Sisulu and Mabuza. There are some of us who say, let Mabuza take the lead with Sisulu as deputy president and Ace as the second DP.”

The sentiment is shared by one national party insider, who said there was a broader call for Mabuza to emerge as number one, instead of Sisulu.

He said, while Sisulu would most likely be part of the top six, he believed Mabuza had cemented his place within the fight back faction.

“There is another discussion for Paul or Ace to become chairperson. Sisulu’s credentials, her experience in government both internationally and locally, are a strength. We also need to heed the call for a female deputy president or president. Bathabile and Sisulu will push hard on this.”

The other power players, Zikalala and Dlamini, have been touted for the roles of secretary general and treasurer general respectively.

Zikalala controls the biggest province, with the biggest region in the ANC – the eThekwini region played the kingmaker role in Mangaung 2012, where Ramaphosa was elected Jacob Zuma’s deputy.

“We are consolidating our efforts in Mpumalanga and KZN. The SG placed the convener and co-ordinators who are our people. In the North West, we have grounded Malusi (Gigaba) as the NEC delegate to bring it back, and this line-up will consolidate Supra’s return. In Limpopo, we have Florence (Radzilani) and Danny Msiza. We are working the ground and we are gaining numbers.”

One of the first battlegrounds in the fightback-war may well be Parliament.

Last week, National Assembly Speaker Thandi Modise approved the DA’s motion to institute removal proceedings against Public Protector Busisiwe Mkhwebane, who is believed to be one of the key pawns in the fightback campaign.

Word on the Parliamentary streets is that Mkhwebane’s friends in the ANC caucus are saying: “She ain’t goin’ nowhere.”

The thing is, it is unclear how many of the ANC’s caucus members are in the fightback camp.

There are some of the more high-profile fightback-figures – the likes of Bongani Bongo, Faith Muthambi, Mosebenzi Zwane and Mahumapelo.

Knowing politicians, a sizeable chunk of the caucus is sitting on the fence and will go with the camp they perceive to be the strongest.

Last year, when the 6th Parliament was constituted, many eyebrows were raised when the likes of Bongo, Muthambi and Mahumapelo were made committee chairpersons.

However, they didn’t get the portfolios key to turning the ship around – like the portfolio committees on justice and public enterprises.

Thus far, there hasn’t really been any indication of a successful fightback campaign in Parliament’s work. If removal proceedings against Mkwhebane proceed after an independent panel’s say-so, Parliament will have to appoint an ad hoc committee.

It is expected that the core of this committee will come from the Portfolio Committee on Justice.

But if the likes of Bongo, Muthambi and Zwane are put forward to serve on this committee, it will be a clear indication that the fightback is alive and well in the ANC caucus.